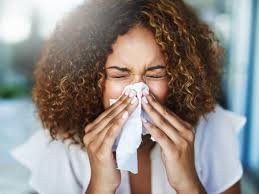 Allergic rhinitis, called "hay fever" in its seasonal form, is inflammation of the nasal walls caused by allergies to pollen or animal hair. Period, symptoms and remedies.

Definition: what is hay fever? At what period?

Seasonal allergic rhinitis, more commonly known as hay fever, progresses at the same time each year for a few weeks. It is most often caused by pollen (80% of cases) or by molds (non-seasonal). Allergic rhinitis is a condition characterized by hypersensitivity of the nasal mucosa to an allergen: pollen (seasonal rhinitis), house dust mites and dust, animals, or any other foreign substance.

Persistent rhinitis occurs at least 4 days a week and for 4 weeks a year. Its diagnosis and treatment remain essential to improve the daily lives of patients and prevent asthma from appearing.

Perennial rhinitis occurs year round. It lasts several months, or even the whole year, without a precise chronology. The allergens most often involved are dust mites and animals. Symptoms get worse in damp and dusty places. Only an allergological assessment can precisely identify the responsible allergen.

The main symptoms of hay fever are:
- itchy nose,
-sneezing,
-a clear and profuse nasal discharge,
-a feeling of a stuffy nose.
- irritations of the palate, ear canals and eyes.
Fatigue, headaches, posterior discharge, difficulty concentrating and falling asleep, and loss of smell are characteristic signs of chronic rhinitis. This pathology, often treated lightly because it is not very serious, constitutes a real handicap for the affected subject.

The cause of allergic rhinitis is hypersensitization to certain allergens, such as pollen, molds or animal hair. There are often familial forms of allergies, suggesting the notion of "allergic ground". "The subjects known to have an allergic ground have every interest in being treated preventively by antihistamine before the arrival of the spring pollens".

Evolution
The nasal walls permanently weakened by allergens (such as pollens for example) are more sensitive to the odors of paint, solvent and tobacco. These non-specific irritating factors worsen nasal discomfort. Allergic rhinitis can take the form of recurrent nasopharyngitis, especially in children, thus directing the diagnosis to infectious manifestations most often treated with repeated antibiotics, which are unsuitable.

NATURAL TREATMENT TO TIGHTEN THE VAGINA

HERBAL TEA TO GET PREGNANT QUICKLY

Among natural remedies, blackcurrant is traditionally used to treat joint pain, in the form of EPS. The anti-inflammatory action of the berries, and the juice extracted from them, also helps relieve the cough associated with hay fever. It is recommended to drink blackcurrant juice several times a day before the arrival of pollens, in case of hypersensitivity to them.
The lanceolate plantain, a perennial herb common in Europe has anti-inflammatory properties, and its use is recognized in the treatment of oropharyngeal irritations accompanying a dry cough. It can therefore help relieve the symptoms of allergic rhinitis. The leaves can be administered as an infusion and tincture. The lanceolate plantain is also available in the form of EPS.